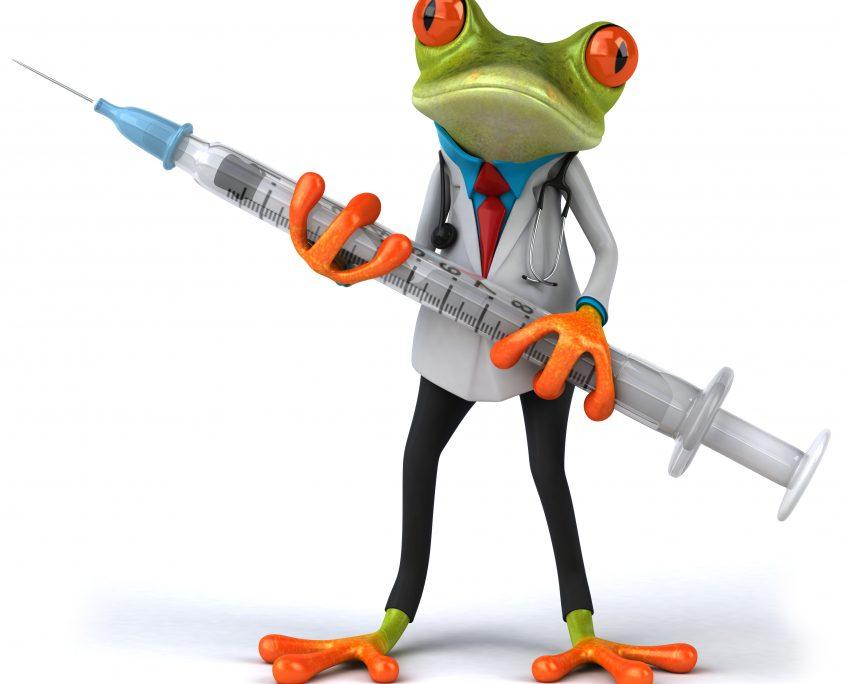 A Frog May Hold Key To Universal Flu Vaccine

We’re now halfway through October, and while we still have a few weeks to go until Halloween kicks off the holiday season, we’re already well into flu season. Flu season (October through May in the United States, with peaks in December and February) tends to bring significant spikes of influenza cases nationwide, as kids go back to school, people spend more time indoors, the cold helps preserve viruses, and people get less Vitamin D from the sun.

Currently, the best defense against the influenza virus is inoculation, and health officials recommend everyone get their shots before the end of October—particularly those more vulnerable to the illness, such as children under 5, adults over 65, pregnant women, and those with chronic medical issues. This year, some are predicting an especially nasty flu season.

“But influenza is unpredictable,” says Colorado epidemiologist Dr. Rachel Herlihy. “It could be an indicator that it is going to be a more severe season. But it could change.”

Unfortunately, the flu vaccine isn’t always effective. While health officials do their best to predict which strain of influenza will impact the country, the result is still an educated guess. In 2014, for example, the flu vaccine protected against the wrong strain, leaving millions vulnerable to the actual virus.

But while flu vaccines are currently the best defense, a potentially better one is currently being researched. And you’ll never guess where scientists found it.

Researchers at Emory University discovered that the non-toxic mucus collected from the backs of a South Indian frog contains an element that causes certain germs to literally explode—while allowing other cells and viruses to pass by.

“We tested it against viruses that came from the 1930s until the current ones, and it kills all of the H1s. It doesn’t touch H3. It’s very, very specific,” explains Emory’s Joshy Jacob, who led the study.

The secret ingredient is an element dubbed urumin, a peptide that targets hemagglutinin (HA), a protein that allows the influenza virus to attach itself to human cells. Without the protein, the virus can’t attach and dies off, and so far, urumin has knocked back every H1NX flu virus it’s gone up against. As for why the germs explode after exposure, researchers are still working on theories—the leading theory being that urumin releases an electrostatic force after binding that destroys the outer shell of the germ.

While urumin doesn’t destroy all types of flu virus, researchers are still optimistic and hope to study urumin in order to develop a universal cure. The tests are currently being done on mice, with ferrets next in line. Then, should those tests go well, humans will be next.

(And if you’re a little grossed out by the idea of taking a medicine distilled from frog mucus, just be thankful you aren’t living in ancient Russia, when people first discovered the medicinal benefits of frogs by dropping them milk jugs helped keep the milk from going bad.)

For this flu season, though, don’t expect any miracle cures. Get that flu shot soon!

If you’re interested in beginning your own career in health care, contact Unitek College today for information on our many available health care programs, classes, and online options.